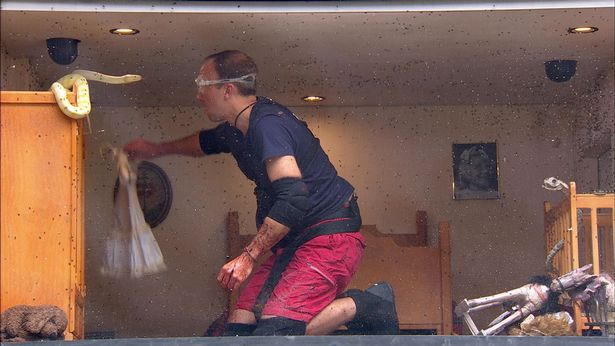 Fans are already a week in to the new series of I’m A Celebrity… Get Me Out Of Here but the latest episode came with complaints within minutes of the latest jungle action being aired. Ant McPartlin and Dec Donnelly were back and so was Matt Hancock doing his fifth consecutive trial.

The former health secretary faced the House of Horrors bushtucker trial after being stung on his finger by a scorpion – which was not poisonous – earlier on Sunday in camp. He was seen by a medic straight away and while being “absolutely fine”, he made a point of mentioning it a few times.

During his latest task, Matt had to crawl through a giant doll’s house full of pigeons, snakes and troughs full of offal, searching for stars to feed the camp. Asked by co-host Dec why he thought the public kept voting for him to take part in the gruelling trials, the 44-year-old responded: “It must be the facial expressions.”

Facing his fear of snakes, the Tory MP located nine out of the 11 stars on offer, despite a snake attempting to strike him at eye level. But it wasn’t long before Matt was being told he would be facing his sixth consecutive trial in the ITV reality show after becoming camp leader in a twist.

And before he even gets stuck into his new camp duties, Matt faces potential revolt after being named leader following a head-to-head with former England rugby star Mike Tindall for control of the campsite, prompting a muted reaction from his co-stars. After appointing ITV broadcaster Charlene White as his deputy, despite them previously clashing over his breaking of Covid-19 guidance during the pandemic, dissent began to spread.

As he addressed the group for the first time, England footballer Jill Scott quipped: “Just to be clear, are these guidelines or rules?” referring to the actions to led him to resign in June 2021. In the Bush Telegraph, Chris Moyles added: “Matt Hancock is our leader. Words nobody in Britain ever thought they would hear.” Coronation Street star Sue Cleaver also joked about them leading a revolution and Boy George quickly came up with a song about never supporting a Tory.

But before Matt was even seen taking on House of Horrors, and before he was revealed for the next trial, which will be aired during Monday night’s episode (November 14), I’m A Celeb viewers were heading to social media to complain.

@kevwgs agreed tweeted: “When you’re looking forward to I’m a Celebrity but then remember Matt’s doing the trial again.” @Im3thirlwall wrote: “Is it just me getting low-key bored of just Matt Hancock doing the trials? It was funny at first but now it’s just boring ngl.” @Jesstashaxo said: “I’m so bored of watching @MattHancock do all the trials!! Vote for someone else.”