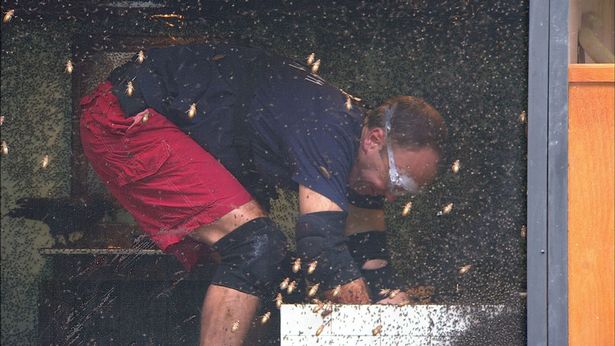 I’m A Celebrity…Get Me Out Of Here is facing viewers ‘switching off’ from the current series after just a week on the air. The hit ITV reality show returned last Sunday (November 6) with ten new campmates ready to swap their lives of luxury for whatever the jungle has to throw at them.

This soon dropped to nine campmates after Love Island star Olivia Attwood was forced to exit just 24 hours after being seen on screen for the first time. But following her early departure, two new arrivals made their entrance in the form of latecomers Matt Hancock and Seann Walsh.

And it’s fair to say that Tory MP Matt has been ruffling feathers both in and out of the jungle with his appearance on the show causing a major divide. During Sunday night’s (November 13) edition of I’m A Celeb, hosted by Ant McPartlin and Dec Donnelly, it was revealed that Matt will be facing his sixth consecutive trial – just after becoming camp leader.

Since the former health secretary, 44, entered the campsite on Wednesday, the public have voted for him to take part in every trial. Earlier in the episode, Matt was stung by a scorpion around camp before facing his fifth consecutive trial, House of Horrors.

The task saw him having to crawl and search through a giant doll’s house full of pigeons, snakes and troughs full of offal, searching for stars to feed the camp. When asked by co-host Dec why he thought the public kept voting for him to take part in the grueling trials, Hancock responded: “It must be the facial expressions.”

Facing his fear of snakes, the West Suffolk MP, who has been suspended from the Tory party due to partaking in the popular programme, located nine out of the 11 stars on offer, despite a snake attempting to strike him at eye level.

But ahead of his next trial, Deserted Down Under, which will be aired during Monday night’s episode (November 14), I’m A Celeb viewers have been threatening to switch off the show if Matt continues to be chosen for the trials.

@j.bc21 said: “Not watching anymore. I’m fed up and sick and tired of Matt always being voted for these trials.” @becca0682 said: “It’s ruining the show series really. I don’t feel we really know anything elses, it’s just totally overwhelmed by campmates not liking him and his trials. Let’s see something else.”

@amy_ennisx wrote: “I’m actually sick of it now. I don’t know if I’m gonna watch tomorrow it’s boring dude.” @3711.jake shred: “Pointless watching this show now I am done.” @Pete_Bassist tweeted: “Do not let him do the next one, if you do I’m switching off and outta here..”

@stevedawson933 shared: “Getting pathetic now this continual picking Matt Hancock for the trials. Are these other celebrities just there for an easy ride sitting around a camp fire! Time to switch off if this continues its getting boring #ImACeleb.” @MattyRatty55 added: “Oh woop… its Matt again… I feel so much joy in hearing its Matt again… #ImACeleb getting to the point where I won’t bother watching this season #SwitchOff.”

Even ITV presenter Lorraine Kelly expressed how she was becoming ‘fed up’ of Matt’s screen time. Speaking to Good Morning Britain’s Susanna Reid and Richard Madeley during a teaser for her own self-titled show on Monday, she asked: “Are we fed up of the Matt Hancock show a little bit? Also give other people a wee chance.”

Later, as her own show began, she shook her head as she spoke of Matt’s appearance on the show, before repeating she was ‘fed up’ with it being the ‘Matt Hancock show’. And Ant and Dec themselves appeared underwhelmed with viewers picking up on their reaction after heading into the camp to reveal the results of the latest vote.

It also appeared that I’m A Celeb fans want Boy George to do another trial. @JackToulson12 tweeted: “We seriously need to vote for Boy George to do the next trial #imaceleb.” @Chelsea_attwell said: “Right Twitter. Let’s start voting for George for future trials #imaceleb.” @mrszulferino shared: “Can we have a campaign for Boy George, Chris Moyles or Sue Cleaver to do a trial now pls? #ImACeleb.”

@trish776 posted: “WTF is wrong with the British public? Stop voting for Matt to do the trials, he breezes through them and it’s not entertaining. Vote for Boy George or Chris Moyles instead. #ImACeleb.” @_MollyJacobsen added: “Boy George for the next bunch of trials please! Hopefully will knock him down a peg or two #ImACeleb.”