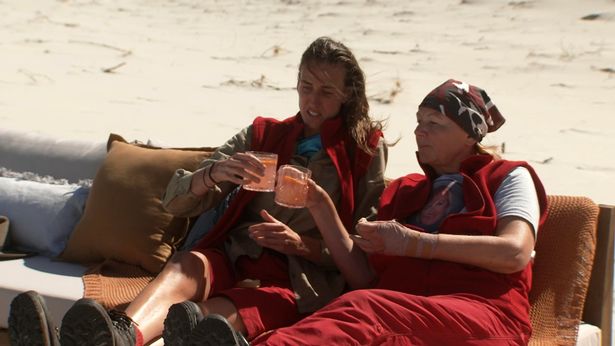 I’m A Celebrity… Get Me Out Of Here viewers expressed their concerns as they spotted a Sue Cleaver detail during the latest trip to the jungle. The Coronation Street star had luck on her side in the ITV reality show as she was one of the three campmates randomly chosen to head to the beach for a slap-up BBQ.

The actress, who plays Eileen Grimshaw in the ITV soap, joined Lioness Jill Scott and former health secretary Matt Hancock on the luxury trip out of camp after all the campmates took part in a challenge to win the ultimate prize.

Only three of the 11 campmates were guaranteed a spot on a helicopter out of camp and after already taking on a few challenges, which saw them having to collect balls instead of stars, it was over to Jill Scott, Mike Tindall and Owen Warner to face the second part of the trial.

The trio were strapped into spinning devices as they attempted to work together, with former England star Jill starting by releasing colourful balls from a tombola-shaped cage full of insects. Each coloured ball represented one of the campmates and the more they got, the higher chance they’d be heading to the beach.

Meanwhile, on the Critter Carousel, ex-rugby star Mike collected the balls and threw them at Hollyoaks actor Owen, who was being repeatedly turned upside down over a trough of water. After the 10 minutes was up, it was over to Ant and Dec to spin the balls in a tombola and select the three stars who bagged the big prize.

And it was Sue, Jill, and former health secretary Matt Hancock who were chosen, with laughter breaking out among the hosts as Sue only had two balls compared to Owen’s 11. However, the Hollyoaks star did end up getting chosen – but for a trial alongside Scarlette Douglas and Babatunde Aleshe to win stars for camp.

But as Sue tucked into her feast, I’m A Celeb viewers couldn’t help but spot her sporting a bandage on her write and quickly asked questions on social media. @leighsmotivate asked: Wait what did sue do to her hand? #ImACeleb.” @isaacgrinnell echoed: “What has @Sue_Cleaver done to her hand/wrist? @imacelebrity #ImACeleb.”

@hannahhlamont said: “Am I the only one who spotted that bandage on Sue’s wrist?? What happened?! #ImACeleb.” @Nicholstix added: “Have I missed something, do we know what Sue’s done to her wrist? #ImACelebrity #ImaCeleb.”

While the mystery is yet to be resolved, Sue’s husband has spoken out about what he thinks about her time in the I’m A Celeb jungle. Sue’s husband Brian Owen said to the Mirror, referring to Sue’s interactions with MP Matt Hancock: “I thought she would be professional but her leanings are towards the Mirror readers’ side of things obviously.

“She has not been too nasty with him, she has been professional and doesn’t want to cause a ruckus between all the people in the camp.” Her son Elliot Quinn, from her first marriage to James Quinn, joked: “Her stuff with Matt Hancock was interesting, Prime Minister Cleaver 2025 yeah, we will have to see what happens!

Elliot added: “She has shown a lot of reliance and smashed it. Anyone going in you would be worried but she is in a place where she feels comfortable with good people to bounce off. I am happy for her.”