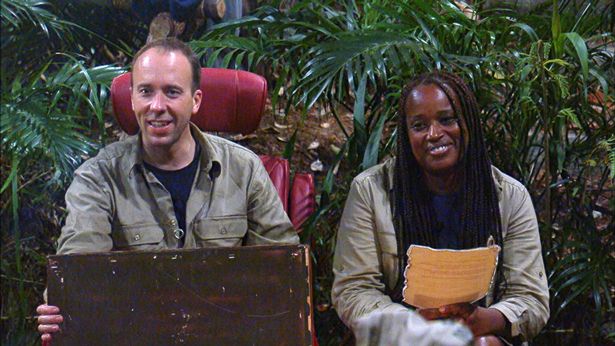 Ant McPartlin has said he will ‘go to the producers’ of I’m A Celebrity… Get Me Out Of Here as he and co-host Dec Donnelly shared their confusion over Charlene White. The Loose Women star has been branded ‘selfish’ by viewers of the ITV reality show as she refuses to sleep in the camp’s RV.

Every year the camp leader and camp deputy get to experience a bit of luxury – or as luxurious as it can get in the jungle – as they get to sleep under shelter and in a comfy bed as opposed to hammocks. Earlier in the 2022 series, Jill Scott and Owen Warner were given the pleasure of better sleeping arrangements before being kicked out for Charlene and Matt Hancock.

Last week, Matt and Mike Tindall both received the most votes for the camp role from the public and, after the former rugby star chose Coronation Street star Sue Cleaver as his right-hand woman, the four-piece went head-to-head in a challenge to decide who’d be in charge in the camp first.

READ MORE: ITV I’m A Celebrity fans issue plea to other viewers to vote ‘moaning’ campmate as they call out reaction to trial

But before he even gets stuck into his new camp duties, Matt faces potential revolt after being named leader following a head-to-head with former England rugby star Mike Tindall for control of the campsite, prompting a muted reaction from his co-stars. And dissent soon began to spread.

Regardless of the reaction, the former Health Secretary and ITV News anchor had to delegate the chores to the remaining camp mates while also being unable to help in such tasks themselves. And as another added bonus, the pair were also able to sleep with some additional comfort as Jill Scott and Owen Warner were kicked out of the camp’s RV to make way for the new leader and his deputy.

However, Charlene was left far from impressed to discover a spider also making the RV home, and even spotted a creepy crawly in her bed. “I can’t do this tonight,” she cried. Then s peaking in the Bush Telegraph, Charlene went on: “My bravery levels are done for today. I really don’t want to have to sleep in the RV.”

And while it appeared to just be the first night, Charlene has also refused to sleep in the RV every night since. And the show’s hosting duo have now waded in after Charlene was asked about sleeping in the RV after Seann Walsh was left complaining about a bad back from sleeping in a hammock.

Hollyoaks star Owen had a quiet word with the ITV News broadcaster and she said she would ‘try’ and change her sleeping place. Matt was also told he needed to speak to his deputy about the sleep arrangements. But when night fell on the camp, Charlene again refused to sleep in the RV leaving I’m A Celeb viewers fuming.

And they think they know the ‘real reason’ why she’s refusing to go into the RV. @easton.lesley said: “Charlene needs to go into the RV and let poor Sean have that bed..just don’t get her!!” @sophiek3844 commented: “What is Charlenes problem. Shes causing such a scene. She shouldn’t be deputy leader if shes going to be ungrateful for an actual bed she’s getting. She’s letting owen sleep on the ground like seriously!! She clearly doesn’t want to sleep in the same room as Matt.”

@aimonp wrote: “Let’s be honest the reason Charlene isn’t sleeping in the RV is because of Matt.” @bobbie.c24 posted: “Make Charlene go in the RV or give the position to someone else.” @ayx_wz typed: “The fact Charlene is making everyone else change their sleeping arrangements cause she doesn’t want to sleep in the comfiest bed in the camp and none of them are saying anything to her about that is really annoying me… Just sleep in the RV! You’re a grown woman stop being so difficult.” @debnamcaroline added: “Why isn’t Charlene being punished for not following camp rules and sleeping in the RV????”

And heading to Instagram Live after the live show for the latest daily show debrief, Ant and Dec weighed in on the bed trouble in camp and asked fans why they thought Charlene was insisting on sleeping in the camp instead. Dec said: “Do you get it? I don’t get it,” as Ant replied: “Why would you not want to sleep in there? It can’t just be because of the spiders.”

He then asked: “Does she not want to sleep with Matt?” Dec suggested that could be the reason and fans were quick to reply in the comment agreeing that was why. But Ant insisted: “I think it might be that but you’ve got to think of others and if other people have to then sleep in a hammock because of your actions and have a bad back, then you’ve got to look at your actions.”

Dec replied: “I’m not sure it’s really playing as a team member by doing that. By taking up a bed.” Dec read a message which he then asked his co-star: “Is she not breaking the rules as a deputy camp leader by not going in the RV?” Ant replied: “I think maybe she is and I’m going to speak to the producers about it.”