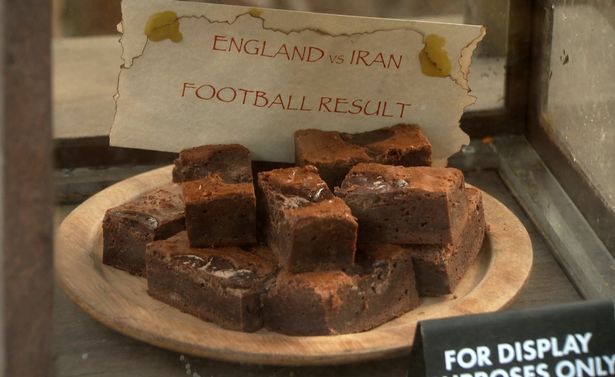 I’m A Celebrity… Get Me Out Of Here viewers were left with two points after watching the campmates take part in the latest Deals on Wheels challenge. As well as a Bushtucker trial to win meals for camp, there was also the daily chance for the stars to win a treat during the latest airing of the ITV reality show.

But they haven’t got a good track record of winning the special prize and have so far, they have lost plates of chocolate and cheese after completing the task, only to get Kiosk Kev’s final question wrong. However, the campmates’ luck appeared to change on Monday night after Seann Walsh and Babatunde Aleshe took a game called Catch My Match which saw them having to correctly match a fact about a celebrity to their photograph.

To make things more difficult, Seann had to walk across planks placed in the air in order to get to the celebrity correct photograph. But their efforts paid off and the pair won the treat after completing the challenge in the allocated time. When they headed to see Kev, it was sweets up for grabs – more specifically Love Hearts – and the camp finally managed to get a question right and get a sugar hit.

READ MORE: Boy George shares exactly how he celebrated ITV I’m A Celebrity exit as he responds to ‘negativity’

Their success, however, didn’t last and during Tuesday night’s instalment of the ITV reality show, Owen Warner appeared gutted as not only did they lose out on chocolate brownies, they also scuppered the chance of finding out the results of England’s World Cup opener, which we on the outside know saw the Three Lions storm ahead with a 6-2 win over Iran.

For the latest challenge, Owen and Chris Moyles were tasked with completing a puzzle based on their fellow campmates playing charades, but despite earning the Dingo Dollars they missed out on the coveted prize. Kev asked the camp: “Which of these had the largest UK viewing figures: The Men’s Euro 2020 final, the Women’s Euro 2022 final, or the Queen’s Funeral?”

While Owen and Chris said: “Got to be the Queen’s funeral,” which was the answer the camp also chose, it was actually confirmed that England’s Euro 2020 final. was watched by more people. As the brownies and football scores disappeared, Chris yelled: “No!” while Owen added: “I need a moment, honestly. That’s actually devastating. Ah mate, I’m gutted.”

However, some viewers aren’t convinced the campmates were wrong. Days after Queen Elizabeth II was laid to rest, it was reported that the funeral was watched by a peak of 37.5 million people in the UK, according to Deadline, with a global viewing figure estimated to be four billion.

But, it was confirmed the day after the funeral that TV coverage of the funeral received a peak audience of 19.5 million on BBC One and an average of 12.9 million on the channel, with 1.22 million watching on BBC Two and 3.5 million on ITV.

Before the Queen’s funeral, England’s Euro 2020 final defeat to Italy was one of the most-watched moments in British television history, attracting a combined peak audience of 31 million viewers across both BBC and ITV, with many millions more watching on streaming services. However, the figures didn’t include people watching in public spaces such as pubs, or the millions of people who chose to watch the match through an online stream, rather than as a television broadcast.

So with the differing numbers wherever you look, it’s not wonder I’m A Celeb viewers were baffled. @kentishjardine said: “They’ve got that wrong. The Queen’s funeral was watched by far more than the football in both UK and globally.” @jack.andrew_ asked: “Was that correct? More views on the football over the queens funeral?”

Others were unimpressed that the question was asked in the first place. @thequeenofgrandmas fumed: “An appalling , insensitive question to use !!!” @tjaywestall_is_the_boss said: “That’s just depressing with that question. More people watched football than the queens funeral.” @saramarmite complained: “Get your facts right ITV it was the queen’s funeral. Sadly, I won’t be watching if they play nasty tricks t like that. You don’t mention the Queen in any question unless you show respect.”