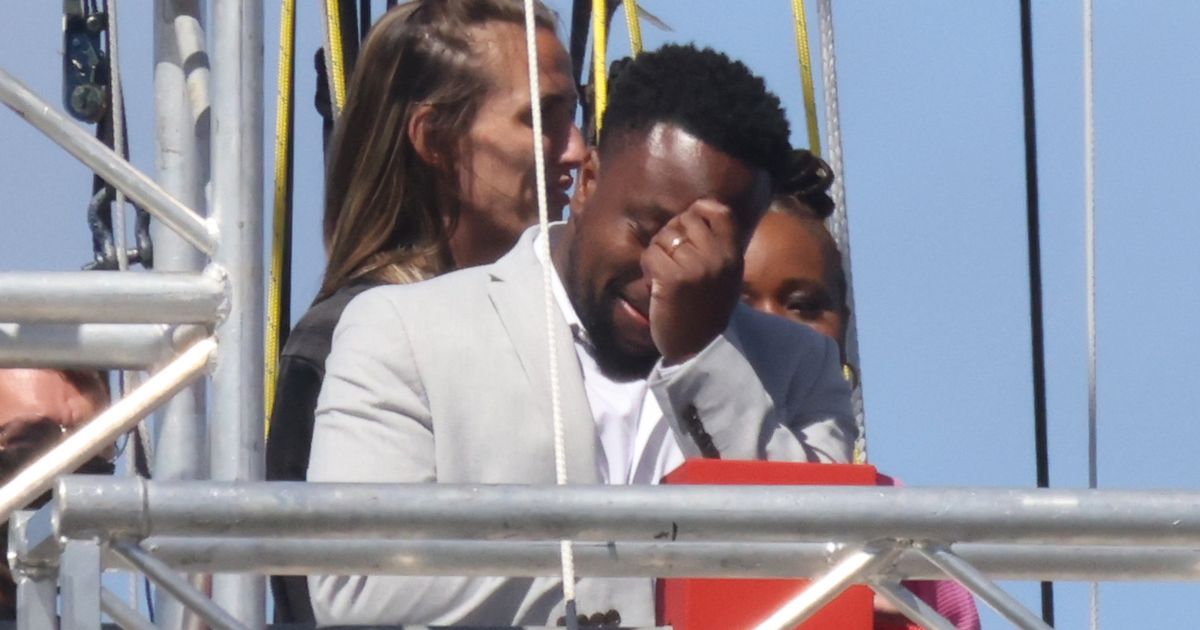 Babatunde Aléshé may have already said “I’m A Celebrity…Get Me Out Of Here” after appearing to pull out of his first terrifying trial.

The comedian and Gogglebox star was joined 32 storeys up on the roof of the Focus building on the Gold Coast by Jill Scott and Charlene White.

Stars are tasked with walking to the end of the wobbling platform and face dizzying heights.

After being told the rules of the game by Ant and Dec the trio then waited 45 minutes before beginning the task, possibly as someone had second thoughts about taking part in the terrifying challenge.

Both women stormed to the end of a plank and, as part of the revamped challenge called The Ledge, had to wait and be tipped up so you looked down to the ground while holding onto a bar with your hands behind your back.

But while both Jill, 35, and Charlene, 42, successfully completed the task, Babatunde could be seen shuffling along his plank and then stopping and going back to the roof.

The comedian was also seen in dramatic photos with his head in his hands, showing fear may have already got the better of him in the show’s first challenge of the series.

Afterwards TV bosses examined the platform for any issues, but whatever happened, Babatunde did not compete in the competition.

One onlooker said: “Babatunde looked nervous before the challenge began and he never got going.

“He shuffled and stopped and left Charlene out on her ledge for several minutes. After that Jill wasted no time and got straight out to join her.

By contrast to Babatunde, both women seemed to hang at the end of the ledge for several minutes as it became steeper and steeper before screaming as they dropped together.

Speaking on Thursday just 24 hours before he faced The Ledge, comic Babatunde insisted he would try to take on all challenges on the ITV show.

At the time he said: “I don’t know about phobias but I just want to challenge myself. I want to at least try with each one at least try, and if it is too much, because it is mind over matter isn’t it?

The trio were earlier run through the task ( Credit / Daily Star)

“But if it gets too much to the point where I mentally can’t deal with this then yeah just say those words do you know what I mean?”

Later in the same interview he said: “To be honest I signed up mainly because I have got a lot of fears that I want to face.

“I am excited for everyone to watch me go on this journey of almost like self discovery.”

Before the first trial, the comedian said he has ‘a lot of fears that I want to face’ ( James Gourley/ITV/REX/Shutterstock)

The terrifying challenge was the first of many for the contestants as filming began on Friday on the Gold Coast.

The celebs are being split into three groups and some will enter the camp after the first show airs on Sunday night on ITV.

The challenge was known as Walk The Plank but has been made harder and is now thought to be called The Ledge.

Watch the terrifying moment in full when I’m A Celebrity returns this Sunday on ITV at 9pm.